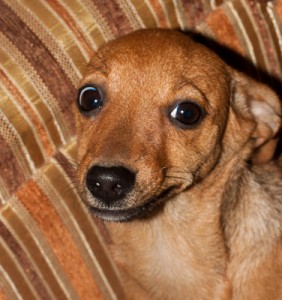 Obsessive Compulsive Disorder (OCD) is a disorder connected with anxiety and stress that the animal cannot control. The typical OCD animal is stated as performing “repetitive behavior that occurs out of context.” This animal performs a normal behavior like cleaning its fur, but to such an extreme that it pulls huge amounts of fur out and has large bald spots in its haircoat. This animal loses the ability to control the normal behavior and keeps repeating it over and over again.

Behaviorists explain it as the dog who wants to perform a certain behavior, but he is not allowed, so he does an OCD behavior instead. These behaviors become so pronounced that the animal can cause physical damage to itself or the humans it lives with. These animals, if untreated, will lose their ability to be good companions and will end up in the shelters. The longer they go untreated, the worse the behavior gets, and the harder it is to break them of the bad behavior. Dogs with OCD also seem to have other anxiety-related behavior issues, such as separation anxiety, noise phobias, or aggression. These behaviors can start to occur at any age and are sometimes related to poor socialization.

There are different types of OCD behavior. Below are some of the more common types and the predominant breeds.

All the other behaviors apply to all cats

Hunting and pouncing on unseen prey

There can be medical reasons for these behaviors, and they should always be ruled out first. A thorough exam, bloodwork, x-rays, and urinalysis may be needed to discover if the problem is mental or physical. Below is a list of medical conditions known to cause some of these behaviors.

Focal epilepsy can also be misinterpreted as OCD because some of the symptoms are the same, including fly biting and flank sucking, depending on which area of the brain is affected. The difference between epilepsy and OCD is that an epileptic dog has these episodes without any stimuli, there is not any predictability, and there is a pre-seizure and post-seizure stage. OCD and epilepsy are hard to distinguish to the untrained eye, and videotaping the pet during an episode is one of the best ways to help distinguish between the two.

Obtaining a thorough history from the owners is a must in helping to diagnose and treat the pet. Questions we might ask are:

Some of the most frequent triggers are:

Example: I would like to eat off the counter, but I’m not allowed.

Example: People or a certain person leaving the house

Am I allowed on the couch or not?

Changes in the environment (going to kennel)

Not enough social interaction with owner

Not enough social interaction with other animals (Am I normal?)

Video taping is one of the best things an owner can do to help diagnose what is really going on with the animal.

Some behaviors are misdiagnosed as OCD when really they are attention-seeking animals. Attention seekers perform the behavior almost always in front of the owner, where the true OCD animal will perform these behaviors when the owner is not home or may even hide away from the owner.

If your pet has been diagnosed with this or the symptoms described accurately fit your pet, consultation wth a behavioral specialist is recommended. (OSU’s Veterinary Hospital has two on staff)

First of all, most experts agree to only treat the behavior if it is destructive to the pet or the owners cannot deal with the behavior. Sometimes animals perform these behaviors to lessen the stress in their lives. Dobermans are known for their flank sucking. Most of the time, this causes no harm to them and seems to relax them. Some cats like to obsessively knead stuffed animals or blankets. This does not cause any harm, and even though the owner may think it is strange, this helps the cat to relax. These are examples of acceptable OCD behavior.

These animals should never be punished! This will lead to more destructive behavior that could include aggression. The first step is to ignore the pet. If this does not work, try leaving the vicinity of the pet. Hopefully the pet will stop the behavior and follow you to see what you are doing. Give them absolutely no attention. You can also try making an unusual sound that pet does not associate with you, such as pennies in a can or a horn. In cat cases, canned air works well. Once the behavior becomes ingrained in the animal, it becomes a behavior that the pet no longer has control over. Below are is a list of things that can help you help your pet.

Make Your Pet Too Tired and Active to Become OCD

Take your dog for walks, with a backpack if necessary, to make him tired.

Play ball or Frisbee with your dog.

If you have a spouse, play keep away with your dog. It tires you and your dog!

Play ball with your cat.

Chase your cat around the house, nicely, do not scare her!

Throw treats for your cat to chase down. You can even do this with her meals!

Put the pet’s food in a toy that they have to get the food out of. These types of toys are also great for mental stimulation.

Hide your cat’s food in different places in the house.

Nightly play dates with neighbors who have dogs.

Put food toys out of reach until you give them to the pet.

Rotate toys every 3 days; this keeps them new and exciting.

Have a constant schedule

Just like people, animals like routine in their lives. When an animal does not have a schedule, it can become stressed from anticipation. A constant schedule enables your pet to relax, because he knows what is going to happen everyday.

Try to reduce any stress that your pet might be feeling. If your pet is stressed when people come over, try putting treats in a basket outside the front door. When people come in, they have to get your dog to sit and then they give him the treat. Soon he will not see them as a threat anymore and will actually enjoy company. Cats can actually be put in a room away from the guests if they get upset. Do not force them in the room! Give them some treats in the room to lure them in there or pay some extra attention to them before your guests arrive. This calms the cat and you.

This is a last resort for animals with OCD, because there has been limited success with drugs. Most of the drugs take 4 to 6 weeks to make any difference in the behavior. Most owners cannot wait that long. There has to be some type of behavior modification along with the drugs to get a response. Some of the drugs that have seen limited success are Clomicalm®, Clomipramine®, Fluxetine®, and Hydrocodone®. Some people have tried antihistamines, but the side effect is that the animal is sleepy. Sometimes this helps to break the pattern of OCD, but many return to the behavior once the pet is taken off the drug. Some of the natural treatments include acupuncture and natural herbs like chamomile.

Lick granulomas in dogs are a little bit different in that they are the hardest to treat. These occur most often in large dogs, such as the Labradors and Golden Retrievers. The dog will lick itself to the point of creating an open, oozing sore, usually on a front leg. The skin becomes infected and is very hard to treat. Long-term antibiotics, antihistamines, and topical creams are the usual treatment. Some people have put wraps on the affected leg, only to have the dog go to the opposite leg and start a new wound. Laser surgery is a newer treatment for lick granulomas because it deadens the nerve endings around the wound, and the dogs seem less likely to lick at it. The dog must be in behavior modification at this time to stop the licking behavior, or it will start the behavior over again, causing more damage.

Just like people, pets have different personalities. Some pets worry more than others; some pets need jobs. (An adage that fits: “If you don’t give him something to do, he will find something to do, and it probably isn’t what you want him to be doing.”) Keep your pets healthy by providing an interesting environment, a consistent schedule, exercise, and the same unconditional love they give you!