The #1 reason cats end up at the Humane Society and subsequently are euthanized is for inappropriate elimination. Most of these cats can be managed or cured if the owner is willing to put time and effort into the problem. This is the #1 behavior problem in cats that we see here, and it is getting a lot of attention from behavior specialists. Our veterinarians can help you eliminate the possibility of a medical condition, such as diabetes or a urinary infection before making the diagnosis of a behavior problem.

There are two different kinds of improper elimination: spraying and house soiling. Spraying consists of a cat that stands straight up, backs up to a wall or other surface, tail twitching, and hind feet slightly going up and down and urinates on that surface away from the litter box.  This cat does not scratch or dig at the area before or after. It usually leaves a mark going down the wall and onto the floor, but is not a big puddle. This is more of a territorial behavior. This behavior usually requires behavior modification and sometimes drugs to correct.

House soiling is a totally different problem. This cat has usually acquired some aversion to the litter box or a preference for another location. Things that may cause a cat to avoid the litter box are:

Aversion to the litter: Not clean enough, litter too smelly, texture wrong

Other cats harass them in litter box: Other pets pin them in the litter box, chase them when they come out

Trauma associated with box: Owner tried to pill them in box, box fell over with them in it

Don’t like the box itself: Hooded, opening too high or small

Location of box: Area too noisy, too busy, near loud appliances (dryer), on different story of house

Stress: Was stressed, went somewhere else and decided she liked it and was not corrected

These problems can all be worked with.

Always keep the litter box clean—for some cats this means scooping twice a day! If they have developed an aversion to the litter, try putting two litter boxes in different rooms with different kinds of litter and experiment with different amounts of litter. If the cat has decided it likes to go on smooth surfaces, like the bathtub or the counter, try a litter box with no litter.

In multi-cat households we have seen problems with one cat jumping on the others while they are in the litter box, or if it is hooded, sitting on top of it and waiting for them to come out. One of the easiest ways to solve this is to cut a hole in the opposite end of the hood so the cat has two escape routes. Also the jumping cat needs to be corrected for its behavior, even if it is playing.

Sometimes cats just need to be re-associated with the box. One of the best things we recommend is to put your cat in a room with the litter box, food, and water (not near the litter box) and any comforts it likes. If you have furniture in the room that the cat has urinated on, cover it with plastic tablecloths or some other surface that the cat doesn’t like. Then leave the cat in this room for about one week. You can socialize with the cat as much as you want, but the goal is to get it to start using its litter box again. This doesn’t work on all cats, because some get very upset being confined, but it does help a good portion of the ones we see.

If the cat doesn’t like the box at all, get a new box! There may be something we can’t see wrong with it. There may be a funny smell (as an illness in another cat) or it may be damaged in some way.The box may be too small for them to get in the posture they need to be in. Try a plastic storage box that is short enough it fits under the bed. These are great for large cats! Try not having a hood, or putting one on. Different cats like different levels of privacy. 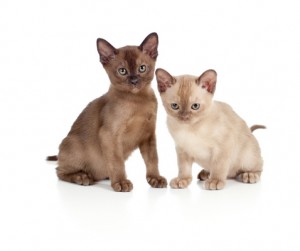 Location! Location! Location! Cats do not like litter boxes that are near dryers, furnaces, fans, refrigerators, or anything else that makes loud noises. Imagine going to the bathroom when suddenly a loud noise comes on. You would be uneasy about going to the bathroom there, too! Therefore, rather than go back to that spot, they just find somewhere quieter, like your closet. Also don’t put the box in a high-traffic area where your cat may be surprised by someone or something coming by.

Sometimes if there is a stress in the household it can make your cat stressed, too. Maybe you went on vacation or someone new moved into the house, or there is construction outside. These things can make your cat insecure, and it will urinate somewhere it considers safe. This cat would do well confined to a room. On average, a cat needs to be confined one week for every month that it has been house soiling.

Remember you want to make the litter box attractive and the other areas unattractive!

Close the doors to all other rooms so the cat does not have access to potential urination spots. Clean all previous areas with special solutions for animal stain removal. Place things they don’t like in those areas, such as foil, citrus products, a carpet runner with the spiky side up, double-stick tape, cookie sheets with water in them, balloons, etc.

Never punish your cat for house soiling! This will only add to the stress it is already feeling. Your cat does not do this out of spite—there is a reason. We humans are just a little lacking when it comes to figuring out the cat mentality of things.

Be patient with your cat and come see us for a consult about your specific problem. We want to help you help your cat!